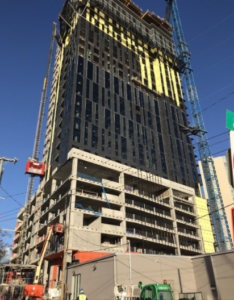 As of this week, one of Nashville’s most anticipated downtown projects has topped out.

At 29 stories, 805 Lea is expected to impact downtown’s skyline and connect two of Nashville’s trendiest districts, the Gulch and SoBro. The 356-unit building is also an ode to a nationwide trend of major mixed-use development projects, as it features more than 10,000 square feet of ground-level retail and restaurant space. Last but not least, the development is expected to deliver around the same time as the long-awaited Amazon.com operations hub, which fuels optimism about 805 Lea’s leasing prospects.