YORK The future of the York County Courthouse is now certain. 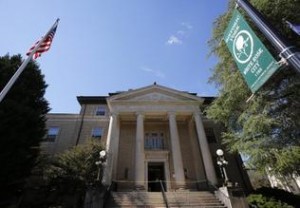 Those attending Monday’s meeting of the York County Council burst into applause when members voted unanimously to move forward with renovations rather than seek to move the courthouse to another location. Now the question is how.

Councilman Joe Cox said he’d like to see the courthouse go to a “vertical” firm that would combine architectural, contracting and construction interests under one roof.

“An architect can miss something,” Cox said. “Somebody sitting in an office all day doesn’t know where the light switch or the outlet is supposed to be.”

State law had narrowed the options available to the county for building a courthouse. The courthouse had to be located within the city limits of York, the county seat; Blackwell noted one proposed location for a new courthouse, the Moss Justice Center on S.C. 5, is outside the city limits.

“We cannot locate anywhere else besides the county seat,” Blackwell said.

Funding is another concern. Monday’s vote followed Cumming’s presentation two weeks earlier that priced renovation of the historic, century-old courthouse as the cheaper option, rather than construction of a building elsewhere.

County officials had been unsure how or whether to finish renovating the courthouse after the cost of removing asbestos and lead-based paint from the building’s walls exceeded what was budgeted.

Initial cost estimates set the project at $11.2 million, well over the $5.3 million set aside by the county. Removing asbestos and lead-based paint has already cost $1.5 million.