YORK — Preserving the York County Courthouse’s historic integrity will be a top priority during renovations, said an official with the company managing the project. 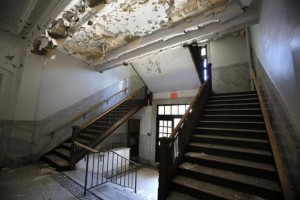 Britton said he expects the electrical, plumbing and HVAC systems to be replaced. The project also involves installing two elevators to make the building compliant with the Americans with Disabilities Act.

Windows are another question, Britton said. He said no decision has been made as to whether to replace the existing courthouse windows or refurbish them, and he expects the project to be bid with both options.

Britton said members of the Yorkville Historical Society, who rose to the defense of the courthouse last year, have been included in presentations about the plans.

“There is a lot of passion about this, and there should be,” he said. “It’s an important project. When this thing is finished, it’s going to be something we’re all going to be proud of.”

Gary Gross, vice president of the historical society and a retired contractor who lives in an historic home, said he was pleased so far with what he said appears to be efforts to “preserve the building in its existing historical profile.”

The renovations plans are being designed by Stewart-Cooper-Newell Architects out Gastonia, N.C.

The York County Council last year agreed to proceed with the courthouse renovation after weeks of debate about the cost that attracted historic preservationists to its defense. The council last week voted to more than double the amount budgeted for finishing the work.

On top of the $4.169 million for courthouse work in the 2014-15 county budget, the council added another $4.9 million. That brings the total amount budgeted for the courthouse to $9.1 million, or enough to meet the most recent estimated price tag for completing the long-delayed project.

The move came as part of a larger move to redistribute capital facilities funds in the budget, including an extra $675,000 to complete roof work on the Moss Justice Center in York.

The majority of the new funds come from an abandoned plan for work on a county recycling center. The entire $4.659 million budgeted for that project, which has also faced delays, will now be used to complete work on the courthouse.

Finishing work on the recycling center will hopefully be included as part of the county’s upcoming facilities plan, said County Manager Bill Shanahan.

The rest of the new money will come out of leftover funds from the 1997 Pennies for Progress road-paving program.

“That money was loaned to Pennies for Progress from the county general fund, and since it was left in there, it’s now being returned,” said Latham.

The Moss Justice Center also will benefit from the amendment, as the budgeted amount for roofing at the center will grow to $2.97 million, moved over from the general fund.

Said Britton: “We want to be as transparent as we can. We all have the same goal, to return that courthouse to life.”