DILLON, SC (July 20, 2012) – A program to improve Dillon County schools has been in the national spotlight since early 2008, when then-8th grader Ty’Sheoma Bethea wrote to President Obama about the conditions at J.V. Martin Middle School. Ms. Bethea’s letter received a remarkable amount of attention and resulted in her being invited to attend the President’s first address to Congress on February 24, 2009, where she sat next to First Lady Michelle Obama. The letter also gave voice to a school building program that the Dillon community had been working for years to achieve.

In the fall of 2007, the residents of Dillon County approved a local 1-cent sales tax option to allow for the funding of a $60 million school building program spearheaded by the Dillon County Board of Education (DCBOE) and the Dillon County Facilities Corporation (DCFC).

However, the subsequent economic downturn left the DCBOE/DCFC building program facing financial uncertainty. Although the mechanism for repayment was in place, financial institutions were now understandably averse to investing in new construction projects.

To secure this funding, the DCBOE underwent an application process with the United States Department of Agriculture (USDA). As part of this process, the applying entity was required to be a public body (such as a town, county, or special purpose district), a non-profit, or a federally recognized Indian Tribe. The DCBOE applied as a non-profit organization. Following approval, the DCBOE and the DCFC established a financial partnership with the USDA, which, through its Rural Development Department’s Community Facilities Program, provides financial support to building programs in rural areas. The goal of this support is to enhance the quality of life for the people who live in these historically under-served communities.

This partnership with the USDA included a $4 million grant, as well as a 40-year loan that enabled the DCBOE/DCFC to pursue financing on the open market and bid out $44 million of Priority 1 projects. The funds for the grant came from the $787 billion economic stimulus bill signed into law by President Obama in 2009.

The Dillon County Schools program, which is being managed by Cumming, consists of three important projects: Dillon Middle School, Lake View High School/Middle School, and Latta Early Childhood Development Center. Dillon Middle School is a new LEED-designed, 128,000-sq.-ft. middle school facility that will replace J.V. Martin Middle School, which was originally built in 1896, and which was the school highlighted in Ms. Bethea’s letter to the President. The project is slated for completion next month. The school’s grand opening—which local officials are hopeful President Obama will attend—will take place at the end of the summer, prior to the start of the new school year.

The Lake View High School/Middle School project includes the replacement of the existing middle school with seven new classrooms, a science lab, a media center, and administrative offices. This project, which is currently in the final stages of completion, also includes the remodeling of an existing 6,700-sq.-ft. wing of the high school. Latta Early Childhood Development Center is a new 74,800-sq.-ft. facility serving students in kindergarten through second grade. In its role as Program Manager, Cumming is working with the various project team members and stakeholders to create functional, up-to-date learning environments that meet the needs of Dillon County well into the future.

The partnership between the DCBOE/DCFC and the USDA has been such a great success — the Priority 1 projects constitute the largest such program in terms of dollar volume nationwide — that Priority 2 projects are also under consideration for construction. 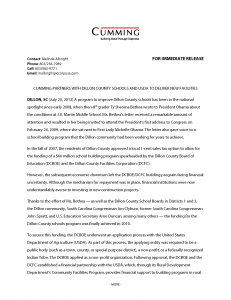