L.A.’s John Anson Ford Amphitheater might finally be ready for its close-up

The performing arts venue, nearly a century old, has undergone an extensive refurbishing.

On July 14, Los Angeles County will conduct a dedication and open house for its 1,200-seat John Anson Ford Theater, the 97-year-old outdoor performance center nestled in the Hollywood Hills that has received a $72.2 million facelift, which took more than four years to complete.

Two of the three construction phases for this project were completed a year ago, including the restoration of the Ford Amphitheater stage with a Brazilian walnut Ipe hardwood deck. The theater is adjacent to a 32-acre park, whose hillside sloping was stabilized with retaining walls and other erosion-control measures.

Artist support spaces have been expanded, and new theatrical and AV infrastructure was installed, including the creation of a sound wall that encompasses a projection booth and control room, catwalks, and an upgraded lighting platform. A sound barrier will help muffle vehicular noise coming from the nearby Highway 101. 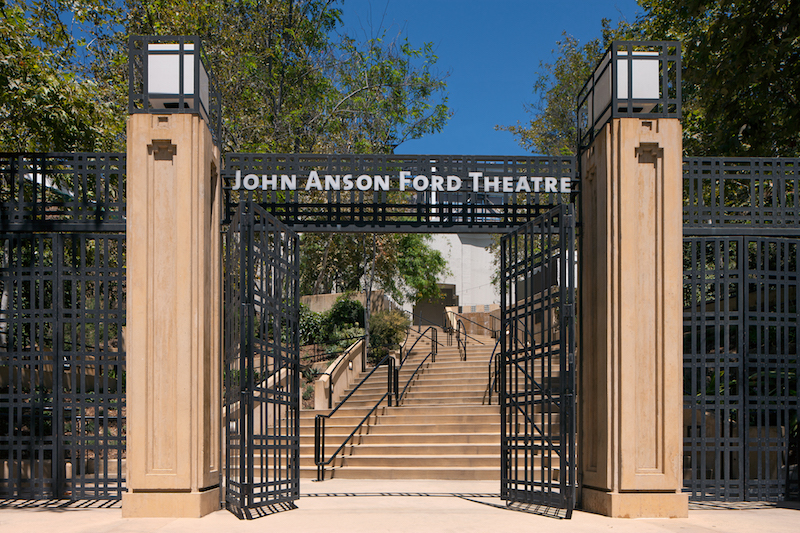 The outdoor theater is located in the hills of Cahuenga Pass, surrounded by a 32-acre park whose landscaping was stabilized and upgraded as part of the renovation. Image: Tom Bonner

In addition, a new three-story structure with a full-service loading dock below and offices above was constructed. An 87-seat black box theater, [Inside] the Ford, was repurposed as a 580-sf self-serve food marketplace and community room. All told the renovation and restoration added 3,500 sf of “found space” from bedrock under the stage, and a 2,315-sq picnic terrace that can seat up to 110. (Crumble Catering is the marketplace partner.)

The John Anson Ford Amphitheater has always been a less-conspicuous, littler cousin to the more-famous, 17,500-seat Hollywood Bowl. 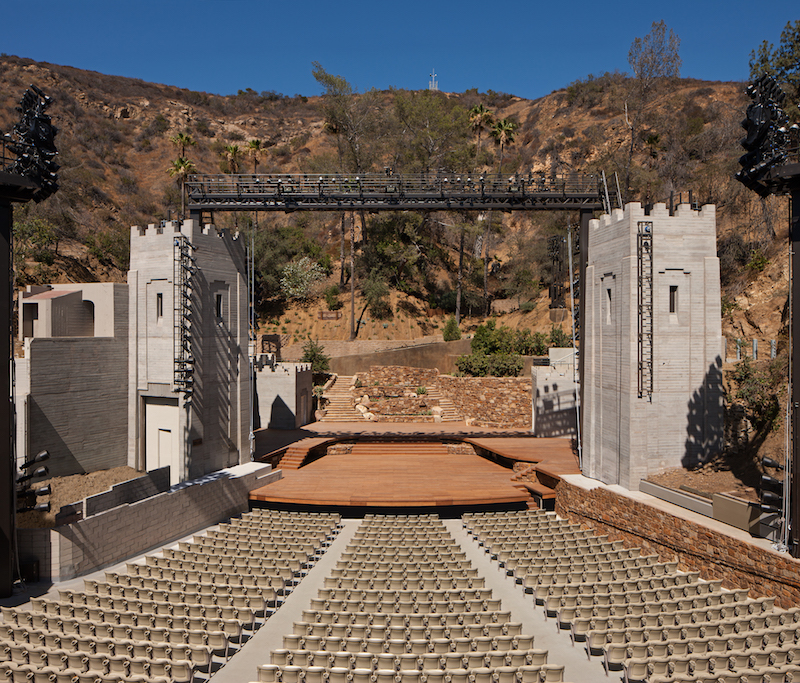 Among the refurbishings of John Anson Ford Amphitheater is the installation of a new Ipe hardware deck for the stage. Image: Tom Bonner

Opened in 1920, the amphitheater was designed, somewhat bizarrely, to resemble the gates of ancient Jerusalem. Christine Wetherill Stevenson, heiress to the Pittsburgh Paint fortune and a playwright, was instrumental in securing the land and building for the original theater, which staged her drama “The Pilgrimage Play.”

In 1976, the theater was renamed in honor of John Anson Ford, and L.A. County supervisor who founded the L.A. County Arts Commission. (The county owns the theater.)