Portland General Electric’s recently opened Integrated Operations Center will help the public utility oversee problems in the public utility’s 4,000-square-mile service area and monitor any electrical emergencies and most importantly, stand up to “the big one.”

The 108,000-square-foot facility, located on the southeast corner of Southwest Tualatin-Sherwood Road and 124th Avenue, is designed to manage PGE’s grid system, overseeing such aspects of the power company’s operations including loads, transmission and distribution.

In addition, the $206.8 million facility was built to ward off any physical attacks to the building while protecting staff at the public utility. It also boasts employee creature comforts, including a fully loaded workout gym.

A state-of-the art grid control center allows employees to see the power grid through a large illuminated screen that takes up an entire wall.

It replaces a previous lightboard the company operated to respond to any power problems.

“Now it’s fully electronic and it changes … colors. If you got a low-voltage issue or you’ve got a high-voltage issue, you’re going to see different colors,” Larry Bekkedahl, PGE’s senior vice president for advanced energy delivery, said during a recent tour.

The center also includes a simulator training room that prepares operators for any future events they might encounter as well as an emergency operations center to handle any potential disaster that could befall the electric company.

Bekkedahl said plans to build the Integrated Operations Center, what they refer to as the IOC, began in 2015 after it was determined that it would be too costly to “harden” PGE’s World Trade Center building in downtown Portland. (As large as the IOC is, PGE officials say they have no plans of relocating the 900-plus employees who work at the World Trade Center headquarters.)

“We began design in 2018 and construction took us about two years to complete and (we moved) in here started last October,” said Bekkedahl.

What designers and staff came up with was a PGE nerve center with advanced technology and analytics they say will “support a smarter, cleaner grid,” along with improved reliability designed to oversee the electric company and its 900,000 customers.

With 220 employees in a facility that’s designed to hold 350 if needed, it is one of the larger employers in Tualatin.

For a city with one of the lowest permanent property tax rates in the region, it’s a boost to local coffers as well, with PGE expecting to pay an estimated $2.5 million to $3 million in property taxes in for the 2022-2023 fiscal year.

“PGE’s Integrated Operations Center in Tualatin is a wonderful addition to the strong local economy that Tualatin is known for and supports,” said Sherilyn Lombos, Tualatin city manager. “PGE is a longstanding, valued community member and we are so excited that they chose to expand and further invest in this area.”

The IOC is designed with extensive safety and security measures in place, including a three-tiered secure perimeter that includes large basalt boulders interspersed throughout the grounds — arranged to stop any unwanted vehicles that might get by initial security measures.

Bekkedahl noted that the changing weather in recent years also is a good reason for having an Integrated Operations Center.

“Last summer, we hit our peak — all-time peak (power) — during that heat bubble that came through. We reached 4,400 megawatts,” said Bekkedahl. “That was 10 percent higher than any previous peak, winter or summer.”

He said given the unusual snowstorm on April 11 and the wildfires that ripped through the state in late summer 2020, he no longer believes in what some forecasters refer to as 40-year weather events.

The IOC will also help in coordinating information quickly, Bekkedahl said. He gave the example of the 2013 sniper attack where gunmen entered Pacific Gas and Electric Company’s Metcalf transmission substation in Coyote, California. There, they shot at 17 transformers in a highly orchestrated attack that caused millions of dollars in damage, an attack that highlighted the power grid’s need for greater security.

“When that event took place, if you were to talk to the operators, the physical security folks, the cyber security folks, none of them knew what the other was experiencing” Bekkedahl said. “And so what you’re going to see in this building is, well, we brought them together.”

On site at the IOC are experts in their respective fields — everyone from engineers to meteorologists. Bekkedahl said that could prove helpful if a hostile country like Russia decides to take some sort of action against a utility, providing PGE with the ability “to see from all angles and be able to quickly react.”

If some type of attack ever happened, PGE would use its emergency operations center, a high-tech room inside the IOC, to communicate in real time with the Federal Emergency Management Agency as well as local and state fire and police departments.

The emergency operations center was most recently staffed during the freak April 11 snowstorm that blanketed the Portland metro area. However, PGE officials say it could be used for wildfires or even a problem at a power plant.

One means of reaching a PGE-type power problem or other situations would be via helicopter, and the new IOC has a helipad on site.

“The key here is situational awareness. How do we make informed decisions based on the best information that we have at the time and then having that nerve center right here, we can talk to each other (which) is great,” said Bill Messner, director of emergency operations center business continuity, who also manages wildfire mitigation.

In case of any emergency situation at the IOC itself, the facility is self-contained, with the ability to operate for 14 days straight. It has off-grid operational capacity as well.

With cybersecurity a top priority throughout the country, Chris Nolke, PGE’s director of cybersecurity and IT, said the last several months have proved interesting for his staff as they monitor all types of potential threats.

“We see there are a number of threats that I would describe them as commodity threats. Every day, thousands and thousands of times a day, somebody ‘jiggles the doorknob,'” said Nolke.

Those doorknobs are the ports that provide customers with a variety of PGE functions on the internet as intruders try to gain entry into the electrical system, hoping to catch the company making an operational mistake, he said.

Nolke said his job is to make sure that doesn’t happen and that his team is well-informed on the ways those threats work.

Still, he said the trick is to watch out for both nation/states trying to attack the system as well as cybercriminals.

The other issues are keeping an eye out for so-called “hacktivism” — that is, people hoping to make a name for themselves — as well as having an insider threat.

“My job is to make sure that I protect and identify situations as best as we can,” said Nolke.

The new facility was built with the idea that it could withstand the Cascadia subduction zone earthquake, the predicted 9.0-plus magnitude earthquake expected to hit the Pacific coast at some point.

“I also didn’t mention, this entire building can move 18 inches in any direction — so when we talk about earthquakes, we have base isolators underneath,” said Bekkedahl.

Those isolators act like shock absorbers, letting the building slide back and forth but remain intact the whole time. 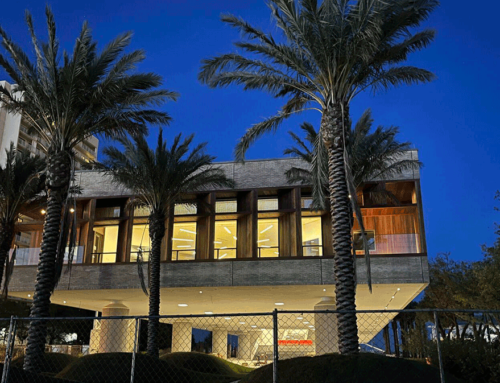