What are San Diego’s Top Workplaces? 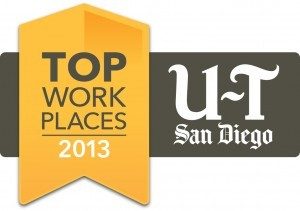 Earlier this year, U-T San Diego partnered with WorkplaceDynamics, an employee survey company, in an effort to find the best employers in San Diego.

Here are the results.

Employees of companies with 50 or more workers were invited to nominate their employers. WorkplaceDynamics also reached out to employers, inviting them to participate in the anonymous survey. In all, 862 San Diego County employers were invited to participate. Of those, 64 completed the survey. The survey of employees at those workplaces occurred between mid-June and August. Respondents answered questions on a scale ranging from “strongly agree” to “strongly disagree,” on statements such as “I feel genuinely appreciated at this company” and “my manager helps me learn and grow.” They were also invited to answer open-ended questions such as “I love my job because:” and “what excites you about the direction this company is taking?”

Employers were divided into three categories for the awards, based on the number of employees. A large company was defined as having more than 350 employees, while a mid-size company could have between 100 and 349. A small business had between 50 and 100 workers.

The survey required at least a 35 percent response rate from employers. Businesses with fewer than 85 workers had to have at least 30 take the survey.

In total, 10,768 of the 18,974 employees at participating companies responded to the survey.