Silverstein Properties broke ground today on an 82-story hotel and condominium tower at 30 Park Place in Tribeca, which is slated to be Lower Manhattan’s tallest residential tower and its first five-star hotel.

The Four Seasons Downtown will stretch 926 feet high and is set to open in mid-2016. The property will include a 189-key hotel, over 15 percent of which will be suites, crowned by a 3,500-square-foot Royal Suite. Hotel amenities include a fitness room, swimming pool, and children’s playroom, while residents of the 157 luxury condominiums will also have access to three terraces.

The launch date for the property’s residential sales, managed by Corcoran Sunshine Marketing Group, will be announced in early 2014, a Silverstein Properties spokesperson told The Real Deal. 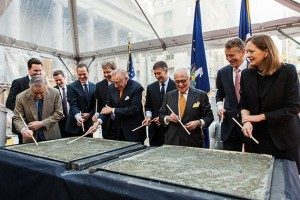 “Although I was born in Brooklyn and raised in Washington Heights, I have been personally and passionately involved with Downtown for 40 years,” Silverstein told the crowd, likely referring to his firm’s development of several buildings in the new World Trade Center complex. “In a few short years, Downtown will have completed its incredible transformation into the world’s most vibrant, integrated mixed-use destination on a scale not seen in New York City since Rockefeller Center opened in 1939.”

The hotel will be the Four Seasons’ third in New York City, with the luxury chain’s flagship property currently located at 57 East 57th Street in Midtown, but the first conceived as a Four Seasons, as Craig Reid, president of the chain’s Americas hotel operations, told the assembled crowd.

“Both of the other hotels we’ve been involved with were conceived of for other operators and then we took over operations,” Reid said. “It’s been very exciting for us to be involved since 2008, commenting on room types, commenting on entrance, commenting on styling. It’s great to see it now starting to go vertical.”

The design, conceived by architect Robert A.M. Stern, also on hand at today’s groundbreaking, aims to preserve the character and flavor of the neighborhood while simultaneously bringing Lower Manhattan a new experience with luxury service, Reid said.